Go-getter and trendsetter are terms that quickly come to mind when describing all that is Eddie Rush. By today’s standards, he is what many would call a triple threat. This twenty-something has already earned his stripes as an accomplished athlete, high school coach and businessman. But truth be told, these talents barely scratch the surface. This is clearly evident as he’s now shifting gears and embracing the personas of his alter ego as a songwriter and recording artist.

Born in Atlanta, Georgia, Eddie grew up listening to Pop, R&B and Hip Hop. Stylistically, his musical influences include artists like Usher, TI, Lil Wayne, Trey Songz and R. Kelly. Yet there’s something to be said about the ‘sound of the south’ that has fine-tuned his ears throughout the years. And it is that ‘sound’ that drives him to create the music he’s making today.

Eddie’s been in the studio working on solo projects, as well as music for his group–Afishal Bizness. Best described as party anthems and after-set music, he has penned and recorded a suite of songs that will soon debut on his first full-length LP. “What’s a party anthem? What’s after-set music?” you might ask. In the music world according to Hear What I Hear, party anthems are the ones that get you crunk on your way to and/or while you’re in the club. And the after-set…well, that’s ‘ride out/post club/on the way to The Waffle House’ music. 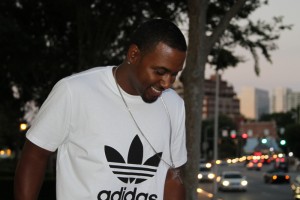 In July, his lead single, “Lights Off,” premiered on Kandi Burruss’ KKN Radio Network. Some of the other singles in the line-up include “Made in Atlanta” and “Spend it All.” Be on the lookout for the release of Eddie’s projects later this year.

Eddie Rush is certainly one to watch and is sure to become the A-T-L’s next best thing!